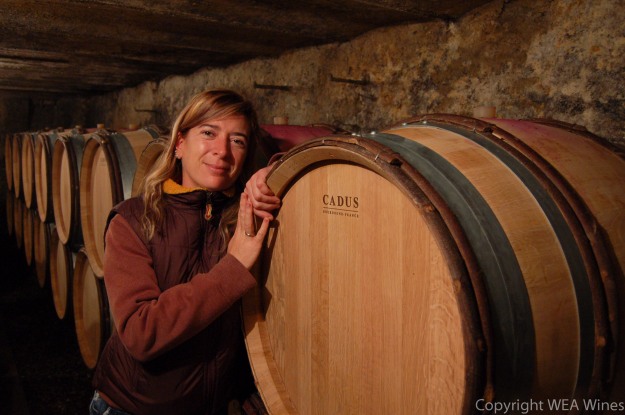 Alexandrine, the 4th generation, has taken over Domaine Marc Roy from her father, Marc in 2003 and now the grand total of workers in the Domaine is… three – Alexandrine and her parents. They tend the tiny 4 ha of vines, all in Gevrey (except for a tiny Chardonnay parcel in Marsannay), and all belonging to villages appellation. The range starts with a basic old vines cuvee. Then there’re two single vineyard cuvees. La Justice is deep, masculine in character while Clos Prieur is more animale, exotic and elegant. The range culminates with a Cuvee Alexandrine which is a very astute way of producing a prestige cuvee which represents the essence of Gevrey-Chambertin. It’s like drinking all the different terroirs in Gevrey in a single bottle. If you are a Gevrey fan, you must try this!

The wines are 100% destemmed with only 50% new oak. They are bottled very early to maintain freshness, in fact already bottled in August last year! I like the wines a lot because they are as Gevrey as can be. Simple, traditional Gevreys. Again, the Domaine fulfills our criteria of wines which are pure and terroir-driven, hence a WEA Wines Exclusive. This isn’t a “new” Domaine as the wines have long been in the restaurant circuit in France but due to the nature of the production and villages vineyards, no other importer has risen to the challenge yet. There isn’t much wines to go around in this, 30% smaller than usual, 2013 vintage so…

Alexandrine Roy told me that 2013 was a “very late vintage where bud burst occurred 25 days later than it did in 2012. We had an extended flowering that lasted for almost 3 weeks which is never a good thing for either quantities or consistency of grape maturities. Things improved a bit in July and August but then deteriorated once again the second half of September. Because yields were so low ripeness levels were better than you might imagine given my description of the growing season. We picked from the 27th September to the 2nd of October and there was a lot of sorting required with some of it being for rot and the rest for under ripe berries that were the result of the extended flowering. The hard part about managing the harvest wasn’t the vinification as that was relatively straightforward. No, the tough part was the painstaking process of the sorting as it required unwavering attention to detail. If you did that though the rest of it was pretty easy. As to the wines I like them a lot as they’re both fresh and refreshing with good terroir transparency and bright acidities. I always hesitate to call wines fun to drink
as it sounds like they’re not serious somehow but in my view the 2013s are fun to drink.” Roy noted that her 2013s were bottled in August 2014. For those readers who are not familiar with the Roy wines, the style is a mix of old style classicism coupled with moderate new oak treatment that doesn’t upset the balance or transparency. The wines are absolutely worth
trying should you see them, and at the prices that I have seen on offer, they represent fine value as well.

Label snobs can skip this review, as it only contains wines from village vineyards, which they would not deign to drink. For the rest of us, these are exciting wines, showing that old vines and effort in the vineyard and cellar can pay off and deliver wines of premier cru quality. Alexandrine Roy, who also makes the wine (not just consults) at Phelps Creek in Oregon, is justly proud of what she accomplishes here. The style is one of purity, precision, and freshness and the wines can drink very well young.

Because of the long (three week) flowering period, there were grapes of different generations on the vines, here as everywhere. Alexandrine worked over the summer to take off the grapes from the later-flowering, and so when she harvested, she just took in the grapes from the early flowering and had uniform quality. Additionally, she took off some leaves to help promote the quality and ripening. As a result of her work, she was able to harvest from September 27 to October 2, earlier than many and before the rains that started a few days later. There was a price for the selection she did in the vineyards, though, and she is down 30% from a normal crop. All grapes were destemmed.