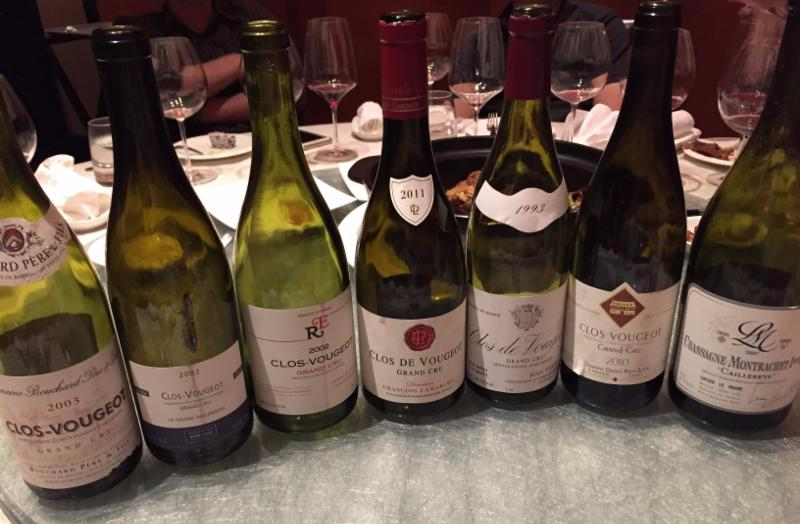 We get quite a few repeated questions every month and for this outlook, I’ll dedicate it to answering some of the more popular ones.

Q: Who are you guys? And how did I get in your list??
A: Yes, we’ve remained under the radar for quite a bit over the past year. With so many wine merchants mushrooming up, it is indeed hard to keep track of who is who, especially when we do not have a storefront nor do we have roots in the wine/F&B trade. WEA are simply wine lovers who want to share the wines we love with fellow wine lovers out there. And quite frankly, we prefer to let our wines do all the talking. If you are in our mailing list, that’s probably because you are a wine lover yourself.

Q: So WEA, where are the expat leaving sales?
A: Ummm… no, we are not Wine Exchange Asia. Any semblance is purely coincidental. Our focus is solely on Old World wines, with a specific focus on Burgundies, Champagnes and some Germans. If Aussies and Kiwis rock your boat, I highly recommend Wine Exchange Asia, our friendly neighbor at Extra Space Boon Keng.

Q: How’s the provenance of your wines?
A: Unlike other merchants, we do not see the point of harping continuously on the provenance of our wines. As wine merchants and wine lovers ourselves, good provenance is of second nature to us. Any wines which we do not manage to sell, has to go into our own collection, so naturally they have to be of provenance which meets our standard. Oh and for the record, corked wines doesn’t mean bad provenance.

Q: Why are your quantities often so little?
A: Firstly, we believe in quality over quantity. It is not easy to find large quantities of Burgundy at attractive prices. For Burgundy, especially, rarity is good. Also many of the Domaines we work direct with are also highly sought after and their wines have to be allocated out. Hence we are unable to fulfill large orders, especially of Grand Crus. That’s the nature of Burgundy and some grower Champagnes.

Q: Who are those winemakers in your portfolio? Never heard of ’em.
A: In the ’70s, Charles Rousseau had to personally peddle his wines in the UK market. In the ’80s, Henri Jayer was plentiful. As late as mid 2000s, before Philippe Engel passed on, the wines of Rene Engel can be had for a pittance. Many of our agency wineries are run by the new generation who has taken over the reins of their family Domaine. Based on our research and regular visits to Burgundy, we have identified those who have the potential to be the next Burgundian superstars. They are all young, spirited and have the determination to inject bold measures to rejuvenate the status quo. Actually that sounds exactly like our business model too. Exciting times ahead!

What to look out for this month?

Offers to look out for in June include:

And several events to round things up:

We started off the month with a 2008 Henri Boillot Meursault 1er Perrières which was a bit disjointed at the moment. Couldn’t pick up much from it. Ending the month was a 2003 JJ Prüm Wehlener Sonnenuhr Auslese GK #9 which was amazingly well-balanced for this heatwave vintage. Acidity was not so high but the balance surprisingly worked out well. Simply unctuous and delicious! Prüms really need age.

In between the two bottles, we had several themed dinners throughout the month. First was a Gevrey-Chambertin dinner at Burlamacco (free corkage on Tues!). A pair of Dugat-Py Coeur de Roy TVV started things off. The ’06 more expressive, riper with lovely aromatics yet dense with extract. The ’08 more acidic, reticent and structured. Next three big guns. 2008 Bachelet 1er Les Corbeaux was very balanced and pleasant if a bit tactiturn – I kinda liked it! 2009 Claude Dugat villages was stinky in the beginning but opened up with air. Very concentrated for a villages. 2009 Fourrier 1er Les Goulots was typical Fourrier. Elegant yet intense. Very balanced for this ripe vintage. Next up, 2012 Pascal Marchand 1er Fonteny which spoke of its cooler microclimate. Modern and slightly anonymous though. 2011 Duroché 1er Lavaut St. Jacques was very pure, elegant with a interesting aromatic nose. This followed through to the intense, juicy palate. This was a incredibly gorgeous and gulpable wine. Finally a Grand Cru to round things up – 1999 Vincent Girardin Clos de Beze. As with many ’99s, this was big, concentrated and very tight despite sitting in a decanter. One for the ages. Conclusion: Gevrey wines are easy to like. They are fairly fruit-dominated with hints of animale, leather, forest. No wonder many start their love for Burgundy via Gevrey!

Next themed dinner was all about Clos Vougeot. But first the white, a 2007 Lucien Le Moine Chassagne-Montrachet 1er Les Caillerets. This was ripe, big, buttery and minerally. I guessed a Corton-Charlemagne from a ripe vintage. Apparently I was very wrong! On to the Clos Vougeots proper. 2003 Bouchard was very good for the vintage. One couldn’t tell the low acidity though palate-wise it was a tad anonymous. 1993 Jean Tardy tasted younger than it was. Many guessed early ’00s. The balance was still intact though it isn’t a showy wine. 2011 Lamarche was the surprise of the night and one of my favorite. It definitely outperformed the vintage as the structure and extract reminded me more of a 2010. One of the few 2011s which needs many more years. 2002 Rene Engel was next and what a treat. This was surprisingly more aged than I thought though. I guessed a ’93. This got better with more air and was the first to be emptied. Lovely juice. Interestingly another 2002 of the night from Anne Gros was totally different from it. Anne Gros was really fresh, pure and spicy which the Engel was more unruly, masculine. What a great comparison. Lastly 2010 Daniel Rion which showed the 2010 purity of fruit and structure well. Drinking quite well now. Conclusion: There are many different styles of Clos Vougeot but the common factor is austerity in the flavor profile. The tannins are not as harsh as Nuits St Georges but still can be unattractive for beginners. Also the style is quite variable so it is not easy to have a grasp of it. No wonder many do not appreciate this Grand Cru!

To cap the month, a pretty amazing Echezeaux dinner. Before we began, some whites to start. 1999 Maison Leroy Meursault was everything an aged white Burg should be though it did seem a tad aged for a ’99. Golden. Honeyed on the nose and saline on the palate. Intense attack but rather short finish. 2004 Blain-Gagnard Criots-Bâtard-Montrachet was still rather young and was dominated by minerality rather than fruit. Finally, 2004 Bouchard Chevalier-Montrachet La Cabotte was absolutely stunning. A little oaky at the moment but no doubt will integrate over time. One sense so much potential here. And on to the stars of the night. The 2011 Jean-Marc Millot was underwhelming. Light, pure but lacks good intensity. Also a tad candyish and anonymous. 2005 Perdrix was tannic and a beast. Quite enjoyable in the beginning but later on the tannins overwhelmed it. 2004 and 2009 Jayer-Gilles couldn’t be more different. The ’04 was one of the rare ones which wasn’t green at all on the nose but perhaps a little bit herbal on the palate. I guessed 2001 though. Very nice and drinking nicely now without being prematurely aged. The ’09 had some mint and big ripe fruits. Not showing too much at the moment but will definitely emerge into something great. 2008 Anne Gros was as usual pretty, aromatic, spicy and drinking nicely. Light-handed and feminine in style. A crowd pleaser. 2004 Meo-Camuzet meanwhile was surprisingly robust and tight for the vintage. Some green pepper on the nose which was mildly distracting. One of the few ’04s which needs more aging. This was one of the 2 favorite wines of the night. Next up, 2007 Bizot. Blinded, I preferred this over the 2007 d’Eugenie which was big and brooding for the vintage. Very concentrated and a tad extracted. Most preferred this over the Bizot which was more elegant and light and true to the vintage. A 1999 Grivot was brimming with dry extract but so shut down. Austere but impressive. Finally, a 2006 Mongeard-Mugneret VV which had the most Vosne-like nose amongst all the wines and the most identifiable as a Echezeaux. Beautiful red fruits and spice dominates the nose which the palate was sappy and pure. Not oaky at all. This was the other wine of the night. Conclusion: Some Echezeaux shares more similarity with Clos Vougeot while others with the other Grand Crus of Vosne-Romanee. The wines are structured and robust. Not as austere as Clos Vougeot. Not all show Grand Cru presence but when they do, it is clearly justified as a Grand Cru.

Love the older Roulots which shows more roundness and balanced acidity. Happy Monday everyone! #MeursaultMonday
First whiff reminds me of a natural Anjou Chenin. Powerful and distinct lanolin nose. Immense dry extract here which buffers the high acidity. Very impressive showing from Autran and surely will improve with more air. Best to open this 2016 few days in advance! #chenincheninchenin
Light and pure but strangely oak got more prominent with air. I guessed 2002 Echezeaux, as it was quintessential Vosne (esp on the nose) and usually their Beaumonts is more hefty. Still young of course and showing immense potential. Gorgeous!
2012 Jules Bonnet from @champagnebonnetponson is showing all the signatures of this great vintage. 100% Pinot Noir but not heavy at all. Precise and racy entry and a sappy long finish. Tremendously good value and a hidden gem indeed!
#40 👊🏼 2017 Julien en Billat L’enfant terrible du Sud
Was expecting something sweet and heavy but this lovely 2018 Demi-Sec from @jeanphilippeblot was anything but that. Very fresh, refreshing with a lovely touch of apricot and tangerine sweetness. The Chenin acidity made it so moreish. Paired wonderfully with the Panna Cotta dessert. Not made in 2019 due to frost so stash some away for the future! #chenincheninchenin
%d bloggers like this: