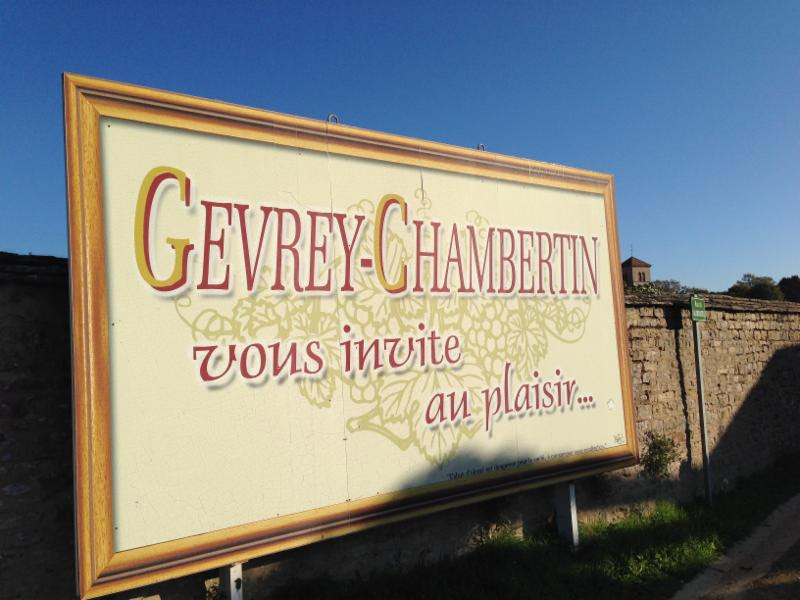 (Gevrey-Chambertin invites you to enjoy… their wines?)

Sorry for this rather late outlook as February is shaping up to be a pretty busy month as we try to clear up our backlog of work before Chinese New Year. It is also an anniversary of sorts here as it was exactly one year ago in February 2014 that we refreshed our business to focus more on Burgundies. How time flies and we believe in the past one year we have done our bit to shake up the wine scene here and to bring many lovely wines to your cellar and of course, dining table.

Late last month WEA have kicked off our 2013 Burgundy En Primeur campaign and there are plenty more exciting names in the pipeline. EP is all about wine ‘futures‘ and they offer you the chance to buy the wines at the lowest possible prices when the wines are still in barrels. We are proud to be the very few importers in SG to be offering wines in this way. As compared to Bordeaux, Burgundy EPs take only less than a year before the bottles reaches you. For those who are still unsure AND uncertain about this vintage, I will let the professionals chip in with their 2 cents:

“I must confess that this is my kind of Burgundy vintage, as I value aromatic high notes, energy and site specificity in my wines. The 2013s tend to be medium-bodied; even when they are silky, fine-grained and utterly delicious, they’re not especially fleshy. And they are vibrant: you’ll see adjectives like cool, pungent, sappy and crunchy throughout my notes and more mentions than usual of tart red fruits like pomegranate and cranberry.”

– Stephen Tanzer, Vinous Media.
“But I will say that 2013 is the kind of vintage that I absolutely love. It’s a burg geek’s vintage par excellence. The best wines are superbly fresh and transparent as the underlying terroir is truly on parade. In fact I would go so far as to say that the terroir is so crystalline in 2013 that if nonbelievers are not persuaded by the transparency of the 2013s then they are never going to be.”
– Allen Meadows, Burghound.

Also, our new agency Domaine Meuneveaux is finally getting the attention it deserves. It’s a sign of great things to come when Burghound starts to visit a new Domaine:

Frankly speaking there are no longer “bad” vintages like in the ’90s and earlier. There is only stylistically different vintages. Some are structured for the long haul, some are ripe and fleshy, and some are perfectly pure and transparent. Good producers have always made good wines across vintages – even more so now with technological advancement and a will to produce quality wines without too much financial constraints. Such is the golden era for Burgundy. Exciting times ahead!

Feb is a pretty short month with Chinese New Year taking stage, along with another round of drinking and feasting. Our first wine tasting of the year will take place in early March following the arrival of a new batch of wines in late Feb.

March will also see another of our wine dinner series, this time featuring the 2012s of Domaine Mongeard-Mugneret. I get the feeling that many have a less than stellar impression of this Domaine, no doubt accentuated by the fire sales from the previous local distributor. This dinner will give you a chance to reacquaint with the excellent wines of the Domaine which are improving tremendously in recent vintages.

January was another bumper month for us. We started with a mini portfolio tasting at Asia Grand. Food was kinda average but the wines really shone. NV Cheurlin Noëllat Coeur de Famille was laced liberally with salty minerality beneath the red-fruited core. I have to say this is one for the wine geek. 2009 Dönnhoff Hermannshöhle GG feels a tad overripe in the beginning but slowly balanced out with air. This wine needs many more years. 2011 Hubert Lamy St-Aubin 1er Clos de la Chatenierewas fairly rich and concentrated for a St Aubin – many guessed Meursault. 2012 Duroche Gevrey Les Jeunes Rois was all about pretty florals and sweet fruits. So far I’ve not met anyone who has not been charmed by their wines. 2012 Mongeard-Mugneret Vosne 1er Orveaux was very transparent for this ripe vintage. I would have guessed a 2010! 2012 Gérard Mugneret Vosne 1er Brulees was riper, denser and altogether more serious – a mysterious lady in black. 2008 Jean-Marc Bouley Pommard 1er Rugiens ended the evening with people guessing Vosne as there is refinement here in spades. This wine just changes my misconception about Rugiens and no doubt Thomas is crafting some amazing wines here.

A lazy Saturday afternoon at a friend’s place brought out several wines, all blinded. 2003 JJ Prüm Wehlener Sonnenuhr Spätlese was very easy to drink and despite the lower acidity, was very gulpable. 2003 Maison Leroy Bourgogne was amazingly young and didn’t come across as over-ripe though there is a certain anonymity to it. 1995 Camus-Bruchon Savigny 1er Narbantons was unfortunately a little evolved so drink up now. 2003 Gérard Mugneret Vosne-Romanée was the clear standout of the day. It is not easy to find the wines from recent vintages, not to mention one made by Gérard before he passed the baton to his son.

Dinner with some new Instagram friends at Jade Palace with 1999 Pol Roger Sir Winston Churchilland NV De Sousa Réserve 2012. Former was intense and the pedigree of a great vintage is obvious while the latter was more round with some age. Antoine Jobard Meursault-Blagny 1er was clean, precise – more Puligny than Meursault. This is possibly my favourite Jobard cuvee so far. 2005 Taupenot-Merme MSD 1er La Riotte was quite structured, pure and balanced. 2000 Hudelot-Noellat Vosne 1er Malconsorts was more meaty, animale with menthol notes. More savory than pretty. 1992 Burguet Gilles Gevrey 1er Lavaux St. Jacques was surprisingly still vibrant despite the tertiary profile.2008 Thibault Liger-Belair Chambolle 1er Gruenchers had me guessing Vosne, despite my second time having it. 2012 Denis Mortet Bourgogne Blanc was quite a rare sighting and really fresh and delicious for its level. One to keep an eye on.

2011 Coche-Dury Pommard Vaumuriens was typical Coche. Pure and focused. Still tightly coiled and will need years to unfold despite being an ‘early-drinking’ vintage. Such a treat. We had a 2011 L’if at Restaurant Ember (very reasonable corkage and excellent service). The wine was very concentrated for a 2011 with sweet plums and silky tannins. Drinking beautifully with minimal aeration. Ending the month, a simple get-together with 1999 Hospices de Beaune Pommard Cuvée Suzanne Chaudronwhich was surprisingly peaking for the vintage. The first 1999 I had that actually wasn’t tight anymore. The 2005 Faiveley Mercurey La Framboisière was fresher with high-toned raspberries befitting the name. 2004 Château Marojallia meanwhile came up to be untypically ripe for the vintage.

The 2019s from @moreau_naudet have everything. Concentrated fruit and bracing acidity. A vintage to provide lots of charm young yet so balanced for aging. Many will be drank in their youth but with age they will be stunning. Pleased to have them in stock now albeit in super low quantities. Frankly we were very shocked when we received the allocation!
First 2020 Bojo to arrive… the serious, classic wines of the reclusive Daniel Bouland. A charming, fruity Cote de Brouilly to a mineral-driven sandy terroir Corcelette VV Sable and lastly the legendary 1926 vines from Les Delys. These are Bojos which has incredible aging potential. We are honoured to have his wines here!
Linear, crisp and saline. That’s the 2019 Un Matin Face Au Lac from @lesvignesdeparadis. Love the name, the lake referring to Lake Geneva or Lac Leman in French. 100% organic and biodynamic Chasselas. Could be a tad sharp if drank by itself but perfect when matched with cheese. Just keeps the tongue salivating. 🤤
2019 Remus from @jeanphilippeblot is showing incredible precision and potential. Drank over the meal with the superb food at @casarestaurant.sg. So versatile that it matches ALL the courses (except dessert of course). Tight at the beginning but gradually unfolded to show hints of honey, white flowers and a taut, precise and utterly linear palate. Simply mouthwatering. Remus is the entry level cuvee and already punches way above its level! #chenincheninchenin
2019 Las Suertes from @suertesdelmarques. Redolent of volcanic ash on the nose and then dried petals and sour cherries. Palate was pure and unblemished, gentle and low alcohol. A little smoke which adds complexity. > 100 year old high altitude vines from El Ciruelo vineyard in Tenerife, Canary Isles. Gorgeous wine!
Wow… first time trying this cuvee. Second vintage in 2010 from a blend of three vineyards. Whole bunch nose, quintessential DRC. As with many 2010s it was light/medium weight. However no spice notes, so blinded I was confused about which cuvee it was. And when it was revealed everything made sense. Probably not my favorite cuvee in the range (heard newer vintages are getting better), but one ticked off the list.
%d bloggers like this: